For over a thousand years the Kumano Kodo has seen pilgrims making the 65 kilometre journey across the Kii Peninsula on Japan’s island of Honshu. The Kumano Kodo, since ancient times, has been associated with the worship of nature and is considered a sacred site. Modern pilgrims are rediscovering the sacred mountains of the Kumano, and increasing numbers of contemporary Japanese are visiting the Kumano looking for their spiritual roots, while other visitors are drawn by its 2004 registration as a UNESCO World Heritage site.

For those wanting to make the pilgrimage themselves, the closest airport is Kinsai in Osaka. After spending the night in Osaka, leave earlyish to catch the train from Tenoji to kii Tanabe where the visitor information centre just to the left of the station exit will help you with an orientation session, maps and bus timetables. The timetables can be the most important piece of information you carry with you. If you find that the going on the track is too tough, you can catch buses between points and accommodation along the way. Try not to be like so many walking the Kumano and find yourself unprepared for the weather. As it is a mountainous region, you may start out the day in perfect sunshine only to have the mists roll in carrying with it soaking rains. Some intrepid hikers do not let the conditions beat them, prepared or not and it is not unusual to see hikers using what supplies they have with them to compensate – I saw one ingenious couple finish eating their lunch as the rains rolled in and use the plastic shopping bags to put over their socks before lacing up their shoes and carrying on walking – no wet feet for them!

Walking through the villages it is quite rare to spot any living being. You could almost imagine that the villages have not seen any inhabitants since the ancient times, so quiet are they. But there are fresh vegetables growing in the gardens, and the washing is hanging on the lines. Occasionally you will be spot someone bent over toiling in their garden and now and then a dog will bark a welcome (or a warning) as you pass by. 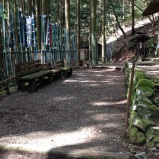 It is a spiritual pilgrimage and as you walk along the ancient paths where thousands have past before you, you understand the Shintoists beliefs that there are spirits in nature. The trees and the rocks appear to be guiding your way, inclining their heads in typical Japanese fashion as you pass.

Walking along the trail with the tall camphor trees either side of your path, with the mists rolling around you should bring to mind a suspenseful movie with wild animals and villains lurking behind every tree and boulder. But incredibly it doesn’t. Instead of the mists and rain being intimidating, they are somehow soothing and you feel enveloped by them, like a caress.

The Kumano Kodo is four days of incessant walking and in some spots can be a little arduous as you are clambering over moss covered rocks which can be slippery, especially after rain. And being in the mountains the weather can be changeable. But the serenity of the track, combined with the beautiful views certainly compensates for any hardships you may endure along the way. The Kumano held many highlights – awakening in Takahara and opening the shoji doors to gaze down the rolling green mist-covered valley; heading out alone on the track as a gentle but incessant rain fell on me, the raindrops plopping in the puddles and ponds as I passed; the sharp sulphur smell of the Yunomine Onsen on day two as I lay on my shutami mat at night listening to the gurgling of the hot springs outside; the majestic Nachi no Taki waterfall which can be seen from the Pacific on a clear day, the perfectly manicured gardens and the dignified splendour of the Nachi Taisha Shinto shrine and pagoda of Seigantoji at my journeys end. 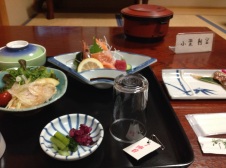 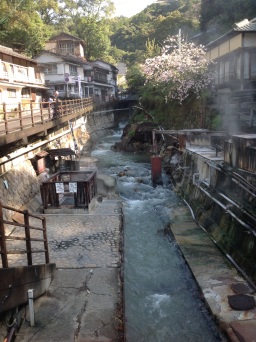 But the true joy for me was to be found in the quiet musings as I walked the ancient paths where so many pilgrims had gone before me, the unsurpassed comfort of the welcoming warmth of the flasks and pots of green tea awaiting me each afternoon as I was shown to my room and the absolute bliss of sinking into the soothing waters of the Onsen baths each night. 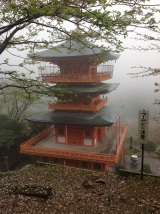 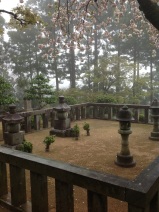