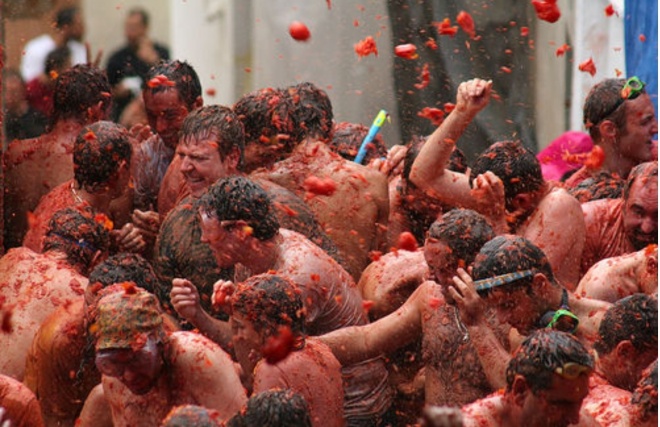 Even if you’re purely an armchair traveller, these 10 whacky festivals will give you a taste of what’s going on in the world at large.

Wife-Carrying Championships, Finland
Participants carry their wives (or any willing female who weighs over 40 kilograms) around a 253.5 metre obstacle course for the chance to win her body weight in beer.

Moose Dropping Festival, Alaska
Moose dung is dropped from balloons onto numbered targets. Whoever holds the same number as the target, wins.

Gloucestershire Cheese Rolling Festival, England
Who wouldn’t want to win a huge piece of Traditional Double Gloucester Cheese? Just chase a piece of cheese rolling down a hill and be the first to cross the finish line. Easier said than done, with the steep slope making it impossible to stay on your feet and the possibility of injury high (but usually only minor).

Tunarama: the Tuna Tossing Festival, Australia
What else would you do with a perfectly good fish, but see how far you can toss it? The current record is 37.23 metres. Watch this hilarious YouTube video showing the tuna flying in Port Lincoln.

Baby-Jumping Festival, Spain
If you have a strong maternal instinct, this probably isn’t a festival you are going to enjoy. It features a tradition dating back to the Middle Ages in which participating babies were thought to be washed from original sin. Costumed men leap over the hurdles of five or six babies placed on padded beds on the ground.

La Tomatina, Spain
40,000 people chucking tomatoes at each other, what an epic food fight! I pity the person who has to clean up the mess.

The Phallic Festival, Japan
An ancient festival where prostitutes would pray for good business and protection from venereal diseases. Modern day festivities feature the phallus as the main theme of the festival and it can be observed everywhere; in decorations, candy, illustrations and even carved vegetables.

World Pooh Sticks Championships, England
An annual tournament paying homage to Pooh Bear. Participants dress up in fancy dress, drop coloured sticks into the River Thames and watch to see whose stick travels down the river fastest. Who hasn’t played Pooh Sticks as a child? If you would like to participate in Australia’s very own Pooh Stick Championships, why not have a look at the Taggerty Pooh Stick Racing Facebook page? The event takes place every New Year’s Day in Taggerty, Victoria.